Mikkell first felt the call to volunteer when she lived in Los Angeles.  Inspired by a group that would help an orphanage in Tijuana, Mexico, Mikkell went online to search for an orphanage that she and some friends could visit.  Mikkell found one, but regrettably heard from the orphanage that she needed to wait at least three months before realizing those plans.

Mikkell’s passion drove her to dig further and find the Casa Hogar Ebenezer, an orphanage in Tijuana with great need, and the right choice for Mikkell.

What greeted the small group of volunteers who arrived in Tijuana with Mikkell were almost a dozen enthusiastic children, and a shack—“if you can even call the structure that”—noted Mikkell.  The ‘building’ had less than four walls and a leaking plastic top for a roof.

Mikkell and the other volunteers brought food, toys, books, and gift cards for the Costco and Walmart located nearby so that the orphanage workers could continue to buy food in their absence.

“As corny as it sounds, children are our future,” Mikkell says. “If you help a child, you can change the trajectory of their entire life”.  One little girl named Xotchil from Casa Hogar Ebenezer stole Mikkell’s heart, as she would run and jump into her arms every time Mikkell came to Mexico. 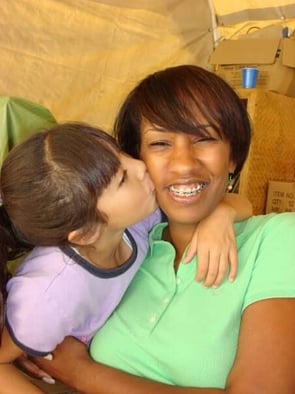 Times were not always easy.  Mikkell and others had some trouble at the border crossing—and were once pulled over by local police en route.  And yet, as Mikkell’s efforts clearly show, perseverance and inspired volunteers can transform an orphanage in a shack into a real home and shelter for 30 children.

That initial Mexican visitation by half a dozen volunteers grew into regular relief missions several times each year, with new provisions and open hearts at the ready every time.  After a call for warm blankets and towels, one of the volunteers contacted a friend who promptly allowed the group to take his SUV with 25 blankets and towels directly to the children.

A volunteer group continues to visit Casa Hogar Ebenezer often in support of the children to this day.  The four brothers who lead the orphanage leverage their construction experience to improve and expand the home built from results of successful fundraising.  Those improvements include electricity throughout the house.

Whatever you’re passionate about, go out and volunteer.  What can come of it may surprise you.

Back to Community Impact