Our organizations are vibrant, organi... 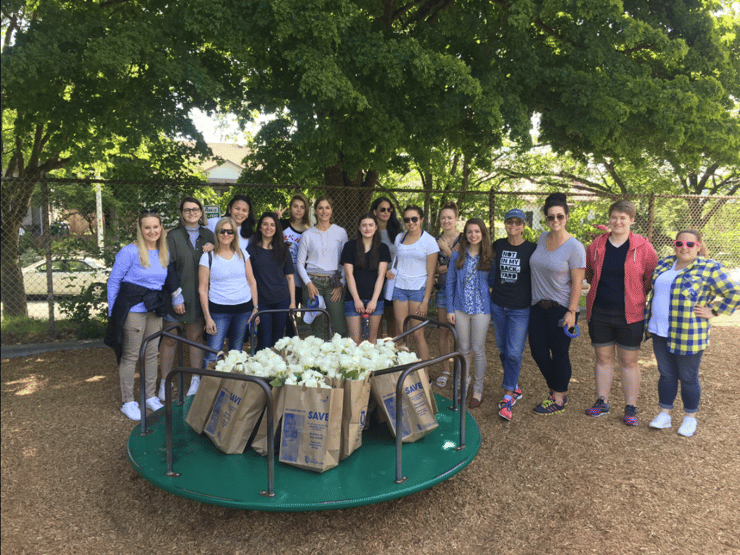 June 6th marked the beginning of StolenYouth’s weeklong public campaign to raise awareness about the child sex trafficking epidemic throughout the Seattle community. Several Waldron employees joined with other StolenYouth volunteers and the nonprofit’s leadership team to line the Aurora Bridge with hundreds of white roses.

According to StolenYouth Executive Director Nicole DiCario, the flowers are a symbol of hope and identity, with each of the 500 white roses representing one of the estimated 500+ sexually exploited youth who are forced into prostitution and trafficked in Seattle every year.

The Aurora Bridge was a deliberate choice for the project. “Aurora Avenue is notorious for trafficking, and children being bought and sold, as is downtown Seattle,” said Ouida Hemingway, a StolenYouth board member. As drivers cross the bridge, they will first pass a billboard explaining the significance of the display and then drive by the hundreds of roses. The organization hopes that this will shed light on a situation within the local community and stimulate conversation among individuals who might not otherwise realize this is happening in their backyard.

A candlelight vigil held on June 10th continued StolenYouth’s campaign, to honor and support the victims and survivors of trafficking. The vigil featured inspiring speeches from both the StolenYouth leadership and local survivors, and urged action.

The vigil was held in concert with Rotary International’s “Candlelight Vigil to End Slavery and Human Trafficking,” held by Rotary International in Atlanta on the same day, and multiple cities around the country also hosted similar events in solidarity.

Waldron is proud to continue to work with StolenYouth and contribute to a mission that we fully support.

Learn more about Waldron's philosophy and engagement in the community.

Getting to Pay Equity